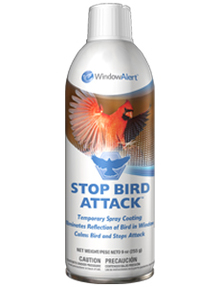 Some territorial birds vigorously defend their territory. These birds perceive their own reflection in a window to be another bird competing for their mate—and attack. Repeated attacks deplete a bird’s energy, putting its health and nesting brood at risk.

Stop Bird Attack eliminates the bird’s window reflection, calms the bird, and stops the attack. The product is a removable, white coating that may be sprayed on any window under attack. Stop Bird Attack is effective for Northern Cardinals, American Robins, California Towhees, and other territorial birds. Once sprayed on window should last up to 3 months.